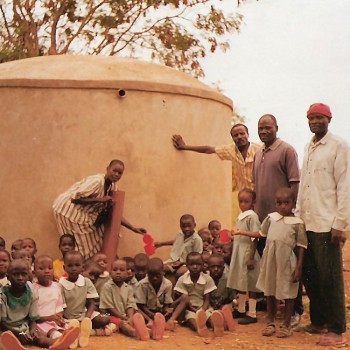 Here we provide a very brief reference on progress. More details are given in annual letters to donors, the latest one being here.

The secondary school course lasts for 4 years and so it made sense to aim to complete the construction of classrooms over a 4-year period, taking in new Form 1 students at the beginning of each academic year, starting in January. With a planned total capacity of 600 students, each new block would consist of 3 classrooms, holding 50 students apiece, plus one extra room (teachers’ room, library, science lab, computer room). These were all completed to high standards of construction on time and within budget, using the funds that you generously contributed.

In order to ensure the viability of the school, the CMCDG transferred its management to the Ministry of Education during its second year.

Well after the hand-over of management to the Government, donors funded several new buildings, most notably a Girls’ Dormitory, planned and largely paid for by the Australian charity Bricks and Cartwheels.

The Government has financed a new science lab, several teachers’ houses, some extra classrooms and, most recently, an Administration Block.

The school is thriving with around 800 pupils, almost half of them girls. Academic performance, as measured by leavers’ exam results, compares well with the best schools in the District, and many alumni have gone on to study at universities and technical colleges.

In spite of secondary education being nominally free, parents and guardians had to meet extra attendance costs, including for shoes, uniforms and lunches. These were well beyond the reach of poor families in the area and created a risk that the new school would be élitist and not be fully occupied while, contrary to the Community’s intent, deserving children could not attend.

This led to the creation of a Bursary Programme aimed at enabling about 40 well-qualified Form 1 applicants to win a bursary valued at Euro 150 per year for 4 years. This helped student numbers to rise quickly to capacity. However, with individual donors sponsoring named awardees for varied periods and expecting to receive their school reports, the scheme became fiendishly complicated to run and burdensome for teachers. This resulted in Andrew and Roberta MacMillan deciding to fund the scheme while cutting their contributions to the investment programme.

Following a further reduction in costs of attending school, the cost per bursary has been cut from Euro 150 to Euro 100 equivalent and external funding is being phased down by 10 new Form 1 entries over 4 years. This is being matched by an equivalent growth in the number of bursaries being funded by former students, thus ensuring the continuation of a significant bursary programme without undue donor dependence.

Message on Progress with Bursaries

The IoT has been growing steadily but more slowly than the Secondary School. One reason for this has been the GMCDG’s decision to run it as a financially sustainable Community enterprise rather than to transfer it to the Ministry of Education. This means that, rather than rely on the government to pay operating costs, these have to be met from income earned from tuition fees and the sale of good and services.  Projections show that, as the facilities are improved and pupil numbers rise, the Institute should become profitable, but during the current growth phase part of the running costs have been covered by donor contributions. This restricts the amount of funding available for the IoT’s capital investment programme.

Subjects for training offered by the IoT were chosen on the basis of demand from young people in the areas and taking account of the Community’s commitment to gender parity. All classes were started in rented buildings so as to reduce risks and to enable available funds to be spent mainly on providing good equipment. Since 2016, when the GMCDG felt that there was sufficient evidence of the success of the Institute, the priority has shifted to constructing new training workshops, designed and equipped to meet the specific needs of each of the planned 10 training subjects expected to be on offer. So far 6 training workshops have been completed. The cost of construction and extra equipment ranges from Euro 30,000 to 40,000 per workshop.

The IoT Building Programme and to 2020 letter for photos

Enrolment by course is shown below:

A water supply and plumbing course may soon be added.

Most IoT students are enrolled in 2 and 3-year courses leading to nationally recognised diplomas but in future there is likely to be an increase in short-term training opportunities which would increase the use of the training rooms, equipment and teachers, bringing is additional funds.

Until progress was interrupted by the Coronavirus epidemic resulting in the Institute’s closure from March to October 2020, there had been some progress towards matching income with recurrent expenditure. During this period all income ceased and the cost of retaining staff had to be met from donor sources.

To make the IoT more attractive for female students, the GMCDG has recently built a Nursery where children can receive care and nutritious meals while their parents are studying.  For a similar motive, IoT staff and students created a temporary dormitory for girls a couple of years ago. Having been built for 20 students, it is now overcrowded with 30 resident students. A new and larger Girls’ Hostel is planned for 2021.

Until now the IoT has offered specialised ICT training but is now shifting its focus to ensuring that all students develop ICT competence. The aim is to build a new ICT workshop in the coming year, enabling the current training programme to move out of the section of the Dressmaking Department that it is now occupying.