Progress with Bursaries: Towards Local Sustainability

Since 2008 around 500 students – mainly orphans – have received bursaries to enable them to attend the new secondary school.

Initially the programme was based on sponsorship of individual students by donors, but it proved to be fiendishly difficult to manage and to ensure that donors received regular reports on the performance of their students. To simplify management, Roberta and I decided to finance the programme ourselves.

The table (below) has been sent to me by George Omollo Owiti, Secretary of the Got Matar Community Development Group’s Bursary Committee which selects students, manages funds received and monitors progress. Here he details the numbers of students receiving bursaries, by source, over the 4 past years.

For quite a few years we have sponsored the entry of 40 new pupils per year which meant that the total number of concurrent bursary holders in any year was 160, minus a few drop-outs. Two years ago, we agreed with the Community Development Group and the school to start phasing out our support for the programme in order to diminish its dependence on us as our age advances. Over 4 years, starting in 2019, we would cut the scale of our funding by 10 bursaries per year, with the last 10 new awards being made for 2022 (for pupils who would leave at the end of 2025). Part of our understanding was that the Community would try to raise the number of bursaries financed by local sources. Any saving that we would make would be applied to capital investments, especially in the Institute of Technology which is now the top priority for donor funding..

The importance of this table on the number of bursaries per year is that it shows that, as our support (first column) for new bursaries has fallen from 40 per year to 20 per year in 2020, there has been a growth in the number of bursaries funded locally (2nd column). Most of these are funded by former GM secondary school pupils, including ones who had themselves received bursaries. The overall result is that the total number of bursary-funded students has now risen to 168, of which 44 are locally funded. This compares with the former equilibrium level of 160! The 3rd column shows that there are 18 approved applicants this year who are not funded from any source

The Bursary Committee will continue to seek for more local donors but has indicated that it would still hope to get some foreign assistance for scholarships for either one or two outstanding students from each of the 10 primary schools in the area as long as the system can be kept managerially simple. The ideal arrangement would be for a donor (or a team of interested people) to enter into a long-term commitment to finance annual batches of 10 scholarships.

The scholarships currently finance school lunches, uniforms, shoes and some extra school staff. The cost is Euro 100 (roughly £100) per year for each of 4 years’ school attendance.

If you are interested in exploring possible sponsorship arrangements, please contact me by e-mail ([email protected]) or by phone (0039 0564507930). 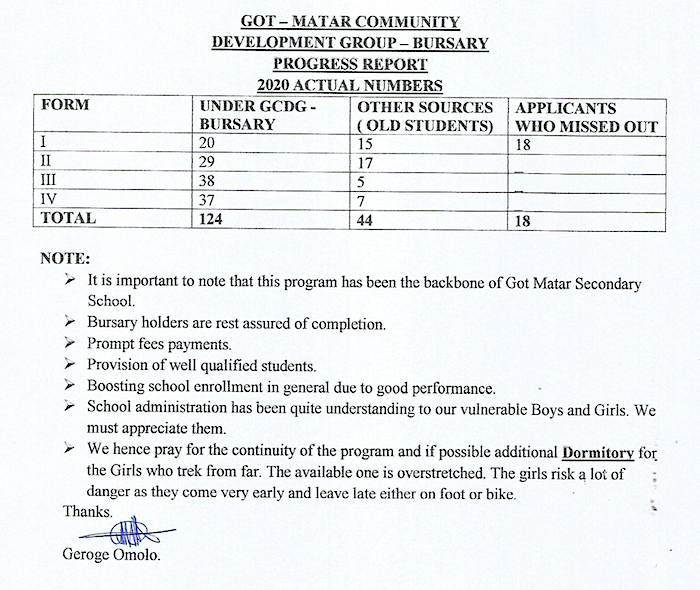