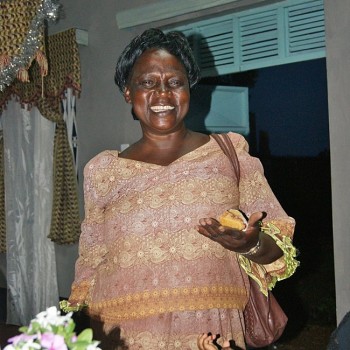 Got Matar lies on the shores of Lake Victoria, the source of the river Nile. (see Location) Its economy is based on fishing in the Lake and on small-scale farming which is susceptible to periodic droughts. The economic problems facing the area had been seriously exacerbated by a very high incidence of HIV infection, triggered in part by the cultural traditions of the dominant Luo population. The custom of ‘wife inheritance’ offers a valuable form of insurance to bereaved widows in normal times but can be lethal when HIV appears on the scene.

The idea of forming the GMCDG emerged during a meeting in Bondo in 2000 in which Andrew MacMillan sought to hear the views on how, largely through their own efforts, the people of the area could overcome the vast damage done by the HIV/AIDS epidemic and a succession of droughts. Several very ambitious proposals were presented by male elders at the event, but then one of the few ladies present asked rather timidly whether she could speak. She introduced herself as Grace Ochieng Andiki, a farmer and a teacher.

She made it clear that it was not the time for big development projects because the local workforce had been decimated by HIV/AIDS, leaving a community of children and grandparents. A generation had been lost and the top priority must be to educate the children, especially the many orphans, to equip them for a better life than that of their parents.

Grace pursued this idea over the next year or so and gathered information on all of the children in the area, collecting their location, names, gender, age and identifying whether they were orphans. At the same time she completed the registration of the GMCDG with the Ministry of Social Affairs, bringing on board other members of the Community.

The GMCDG, for which Grace still serves as the Programme Coordinator, has grown in competence over the years, setting up specialised committees of volunteers to oversee its construction and bursary programmes. After transforming conditions in the Primary Schools, it has built a most impressive Secondary School from scratch (see its blue roofs on Google satmap) and is now engaged in the completion of its Institute of Technology. This has all been achieved through its own efforts without any on-the-spot foreign assistance.